Izle looks to be a truly unque voice on the horizon, blending elements from wildly popular gaming franchises and applying them in new and interesting ways within this artistically beautiful environment. They’re receiving rave reviews based on the game as it is, however they’ve just launched their Kickstarter campaign because they need the support of the community to take the game where it needs to go.

Get ready to explore a breathtaking world with a story and gameplay that is as unique as you. Izle invites its players to build their own world by summoning the power of the gods and terraforming a variety of magical islands where each unique island is randomly created and ready for players to explore. Players will be able to make the world of Izle their own through decisions that will not only affect how you play, but also the fate of your world.

Will you explore the unknown to discover optional secrets that give you new powers and abilities?

Will you fight for the light or allow the darkness to spread?

The power of the elements, light, and creation are in your hands. How this story plays out and ends is up to you. Enter the world of Izle. 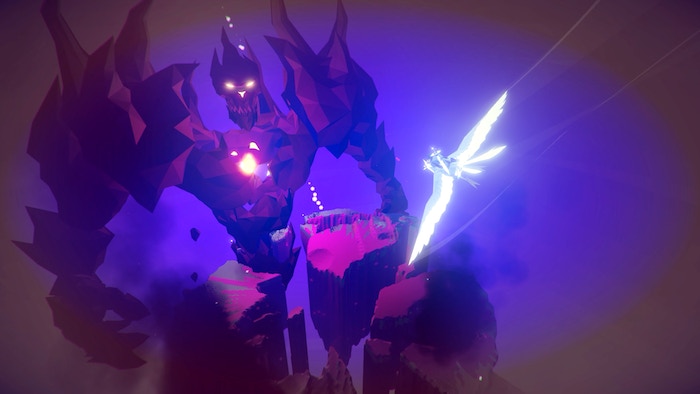 Izle is the last world of Light. The remnant of a long ago war. A solitary island lost in the depth of space and protected merely by a luminous shell that seems only too fragile. Your world was consumed and for years you search for what could become your new home. As you take your first glimpse of Izle, your own unique story begins, as this lost paradise will become what you decide to make of it.

But the Shadows that destroyed your world are trying to invade Izle and confrontation approaches, but is that really why you’re here? Izle’s mysteries, fragmented into a thousand islands, will draw your attention from the distant stars to your own very decisions.

Fans can back the game’s newly launched Kickstarter in a number of different ways. From early alpha access to discounted full game digital copies and a collector’s artbook, players have a ton of options to support the team and contribute meaningfully to Izle by writing, sharing and designing stories, items and even entire islands.