From the moment that I was introduced to this game, I was excited. However it wasn’t until I saw the “interrogation” trailer that I knew exactly how I excited I needed to be. Red Awakening takes all of the grisly, tongue and cheek elements of 80’s horror and blends it with the over the top gore that we love now.

Red Awakening is a team-based multiplayer stealth action game influenced by the slasher movie genre and classic FPS and stealth games of the 90s and 2000s.

Rob Peall, Game Director, Domino Effect, said “The Interrogation video has been a real labour of love for Domino Effect and we feel that it perfectly captures the anarchic spirit of the game as well as a bloody nod to our slasher horror movie inspirations.”

Set during the aftermath of the Vietnam War in the mid-1970s, Red Awakening depicts a United States in turmoil. The youth are out of control, with once peaceful student protests devolving into violent street riots. Fearing a civil war with the youth of America and the ever-increasing threat of communism, the powers-that-be covertly fund a clandestine CIA mind control program. Codenamed: “Red Awakening”, this program is designed to solve all of America’s problems at once.

Violent young offenders and captured Soviet agents from across the country are sentenced to public executions, and then flown by night to secret facilities across the globe. There, they are conditioned and then placed into teams best representing their country of origin, be that from the East or the West. These unwilling participiants are then taken to a Red Awakening test facility, given an objective and set against each other, with the aim of training them to become the perfect, invisible killers required to strike at the heart of America’s enemies.

Who will last the longest? 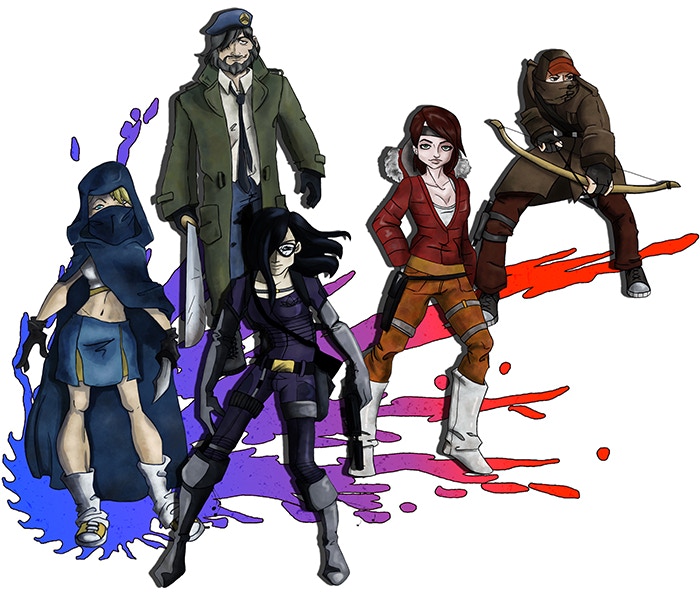 When a contestant enters the Red Awakening program they are placed into one of two teams depending on their country of origin, these being either Team East or Team West.

Team East is made up of a mixture of five unhinged spies and assassins originating from the eastern bloc.

Team West consists of five psycho teenagers from across the united states who are more than eager to kill… .

Drawing stylistic inspiration from the slasher movies of John Carpenter, Tobe Hooper and Dario Argento, Red Awakening‘s gameplay is influenced by the likes of the original Thief, Manhunt, TimeSplitters 2 and Condemned: Criminal Origins, but with the objective team-based gameplay of Counter-Strike.

“We have found that the slasher genre in video games is an essentially untapped market with the potential to create a unique virtual experience. With Red Awakening players are put at the heart of their very own slasher movie for the first time, and let loose.”

Red Awakening is planned for release on PC, Xbox One and PlayStation 4 during late-2015.

The team at Domino Effect is in need of your assistance, check out their Kickstarter campaign. “So far the development of Red Awakening has been entirely self-funded, but we’re now turning to Kickstarter for the necessary support to help us complete the final stages of development.” said Peall.

Developed by Domino Effect Ltd, they’re an independent games studio creating games for Steam and other online distribution services, i.e. XBox Live & PSN. The team consists of 12 talented individuals who are graduates of university/ college and Escape Studios. We are committed to creating high quality and innovative games. Our core audience are fans of classic shooters and stealth games of the 1990’s / 2000’s. Our current project, Red Awakening is highly influenced by the games of that time.