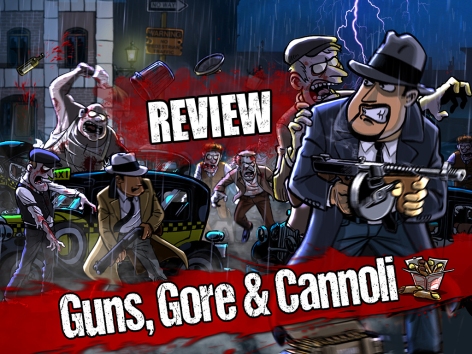 From the moment that I stumbled onto Guns, Gore & Cannoli, I knew this was going to be a game that I needed to play, the title alone suggested it was going to be a lot of blood soaked fun. And the more I looked into it, the more excited I became.

Was it going to be possible for Guns, Gore & Cannoli to live up to my high expectations?

There’s no denying it, the game looks great. Guns, Gore & Cannoli features a hand-drawn 2D art style that is absolutely beautiful, their attention to detail and shading create a great sense of depth. The world of Thugtown is reminiscent of the 1920’s, Prohibition era, New York City, while the characters are atmospherically perfect for the time period.

Crazy Monkey Studios takes the time to establish the story and set the scene right off the bat, however they use cut scenes to keep the story moving. You play as Vinnie Cannoli, a hard-boiled gangster who’s come to Thugtown, to find a wiseguy that’s gone missing. This should’ve been an easy task, little did you know that the city was overrun by the living dead. And to make matters worse you arrived on the wrong side of town, so you’re also having to contend with the rival mob family and corrupt politicians too. You’ve got to blast your way through the city and overcome overwhelming odds in order to find your man.

Gameplay
Crazy Monkey Studios was promising to deliver a 2D side-scroller that was going to be reminiscent of the games that filled so much of my childhood, in this they succeeded and then some. They delivered fast paced, side-scrolling action that is as addictive as it is challenging.

Even though the control scheme is fully customizable, so you can map the keys to your liking, the number of buttons seemed a bit too clunky. This could simply be because I’m more accustomed to playing with a controller as opposed to a keyboard. Regardless it didn’t keep me from enjoying the overall experience.

Side Note
The game features up to 4 player local co-op in the story, I didn’t have an opportunity to test it out at the time of the review. I can’t imagine more than one person being able to comfortably play together, unless you’re utilizing a controller. Fortunately Crazy Monkey Studios planned ahead and integrated full controller support.

Verdict
Its true that Guns, Gore & Cannoli is reminiscent of the 80’s side-scroller of my childhood, its clearly evolved well beyond them. Story & gameplay go hand in hand as you run and gun your way through Thugtown. Available now on Steam at $9.99 this game is a steal, buy it now in case they realize they could be charging a lot more for this incredibly fun survival horror/ action game.