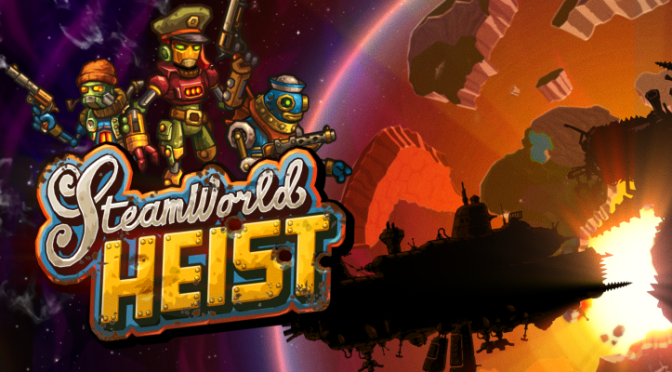 The robots are out of the box, as you might have seen in the Nintendo Direct, SteamWorld Heist is slated for release in December. Not many non-Nintendo studios get to present their games in a Direct, so you can imagine Image & Form is just thrilled about it. Seems like Nintendo thinks they have a winner with SteamWorld Heist.

Their turn-based tactical space adventure is coming to the 3DS first – simply because the 3DS community has been wonderful to then, and neither Image & Form nor the fans would have it any other way. They already know what date and price point we’ll be able to expect, however they’re going to keep us waiting a bit longer…

What is SteamWorld Heist?
Prepare for boarding! SteamWorld Heist is a space adventure with turn-based tactical shootouts, where you aim in real time and perform awesome bullet-bouncing trick shots.

Join Captain Piper Faraday, smuggler and occasional pirate, as she recruits a rag-tag team of steam-driven robots and sets out on a daring adventure. With your hearty crew, you’ll board, loot and shoot your way through enemy spaceships. Overcome the challenges of the vast frontier by upgrading your robots with unique abilities, weapons – and even stylish hats!

“I always pride myself on my ability to stay unbiased” said Brjann Sigurgeirsson, CEO of Image & Form “so it is with pleasure I can objectively state that SteamWorld Heist will be one of the strongest and most pleasantly surprising titles to come out this year – regardless of platform or studio size.”