Allison Road recently hit Kickstarter after a great response from its community and press that saw their prototype gameplay video receive over 1.9 million views on YouTube. The game was on track to fund towards the end of October, however by joining Team17’s games’ label it will allow Allison Road’s creators to focus 100% on the game whilst having resources, experience and support available to them.

END_OF_DOCUMENT_TOKEN_TO_BE_REPLACED

Games industry veteran and independent games label Team17 is excited to announce that they will be unleashing The Escapists: The Walking Dead worldwide on Xbox One and PC on September 30th.

The Escapists: The Walking Dead merges the gameplay and aesthetics of the smash-hit, indie game The Escapists with the universe and characters of the worldwide phenomenon that is The Walking Dead. Team17, working in close collaboration with Skybound Entertainment, have taken the very best of both worlds, featuring panels, dialogue and the story of the award-winning comic series recreated in the charming 8-bit pixel art stylings of The Escapists.

Daniel Murray, President of Skybound Interactive said “The Escapists: The Walking Dead is a creative monsterpiece. We believe fans of great games in general will be delighted to play this unique interpretation of Robert’s graphic novel.   Team17 shares our belief in empowering independent creators. This game embodies that spirit to a tee.”

END_OF_DOCUMENT_TOKEN_TO_BE_REPLACED

Games industry veteran and independent games label Team17 and indie developer Dlala Studios have announced that the madcap multiplayer brawler, Overruled!, is on sale now for Xbox One, PlayStation 4 and PC.

Overruled! is a 2D multiplayer brawler like no other where the players change the rules as they play, directly influencing the dynamics and direction of combat.

END_OF_DOCUMENT_TOKEN_TO_BE_REPLACED

Games Industry veteran and independent games label Team17 and Netherlands based indie developer Self Made Miracle have announced that the fantastically sadistic circus extravaganza, Penarium, will be heading to Xbox One, PlayStation 4 and PC on the September 22nd.

Penarium is a frantic 2D arena arcade game where you take on the role of our quirky antihero; Willy. Willy is trapped in a crazy circus show where he needs to run, jump and avoid an array of killer death-traps while being cheered on by a sadistic crowd that’s out for blood; his blood. Survive the ever ongoing armada of destruction for as long as you can and crown yourself champion of the Penarium!

END_OF_DOCUMENT_TOKEN_TO_BE_REPLACED

Today, games industry veteran, Team17 announced two new and exciting additions to its hugely successful Worms series which will be unveiled at this year’s Gamescom in Cologne, Germany.

Mickey Torode, Team17’s Marketing Director said, “2015 is a special year for us as it marks both Worms 20th birthday and Team17’s 25th anniversary. Moving into 2016, dubbed “The year of the Worm”, will mark the start of the celebrations of 21 Years of Worms”

If you ask me, the Worms franchise has been one of the best ways my cousins and I have bonded and stopped talking to each other. Every year we get together around the holidays, inevitably play Worms, talk trash, and remind each other why we only see each other once a year… Every game in this franchises long history has been a go to for party games and there’s a reason for it, they’re a lot of fun!

END_OF_DOCUMENT_TOKEN_TO_BE_REPLACED

Merging the award-winning, smash-hit, indie game The Escapists with the worldwide phenomenon that is The Walking Dead, Team17 have taken the very best of both worlds and are now providing players with the opportunity to play Rick Grimes as he takes on hordes of zombies let loose upon the world.

In this unique game, recreated entirely in the charming 8-bit pixel art style of The Escapists, Rick is in charge of a band of survivors featuring many of the original comic book cast. He must secure the safety of the group by seeking out a safe escape route from each area, and manage several dangerous tasks to keep as many of the group alive as possible. The game faithfully matches the timeline of the comics and so as the player makes progress in the game they play through locations that mirror the progress of the band of the survivors taken from the award-winning comic’s epic story.

END_OF_DOCUMENT_TOKEN_TO_BE_REPLACED 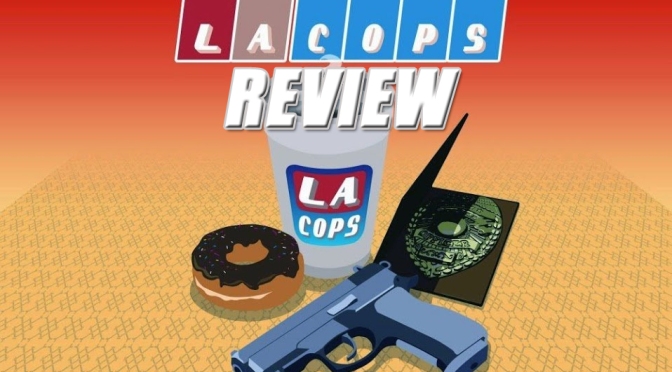 When I heard that LA Cops was coming to the PS4, I was pretty excited. I knew this was going to be a game I’d need to play, I’m a sucker for a good cops n’ robbers storyline. If you’re unfamiliar with LA Cops, here’s a link over to a Let’s Play we featured on an episode of the Monday Indie Spotlight.

However the question still remained, was this going to be an enjoyable take on a top-down shooter or would I prefer solitary confinement?

END_OF_DOCUMENT_TOKEN_TO_BE_REPLACED

LA Cops is a funky top-down shooter, with an emphasis on high octane shootout action. The game plays out like a 70’s era cop show, including all of the politically incorrectness that we love so much.
END_OF_DOCUMENT_TOKEN_TO_BE_REPLACED